DEATH OF AN IMMORTAL 8

The Hardaway residence was in the trendy west side of Bend, only a block from the Deschutes River.  The house was small, probably owned by the family for generations.  Updated bungalows surrounded it, but it still possessed its original particleboard siding, warped by the infrequent rains.
Terrill had driven by it the night before.  A big screen T.V. seeming to take up half the little living room, a couple of old couches, and an older couple ignoring each other at the far ends.  It was nearly midnight, too late to knock on the door. No sign of the daughter.
He felt restless.  He drove out east of town, feeling vulnerable from the lack of cover, trying to get used to the openness of the terrain in this part of the country.  He got back to the motel room, as dawn was already breaking, and the sunlight ready to stab down on him.
It was mid-October, but the sun was shining brightly all day.  Terrill chose the queen size bed farthest from the windows and tried to get some sleep.  He'd be up at the break of dusk -- his internal clock would wake him automatically; trained by centuries of needing to feed at first possible moment.
He turned to his side, remembering Jamie.

They were naked on top of the bed, one of her legs and one of her arms draped over him.
She was languorous.  Something about her appealed to him.  He decided to please her, to make her want it.  In return, she was confiding in him, and for some reason he was willing to listen to this young girl who had almost no experience of the real world.  She had a kind of wisdom, though.  An inner perspective that came from some deep well of goodness.
Jamie talked glowingly about Bend, and especially her younger sister.
"Sylvie will get the chances I didn't," she said.  "She's incredibly bright -- math and science and all that stuff that I never could understand.  She just needs a break."
"That's why you're here?" he asked.  ‘That's why you do what you do?’ He didn't ask.
For the first time, she seemed a little defensive.  Before, she had seemed if not happy in her work, at least content...if not content, resigned.
"I've already put five thousand bucks into her college fund.  That never would've happened working at Burger King."
She was so young, so unspoiled.  But he'd sensed right away that she was a wide-eyed girl in the big city. That's what had attracted him to her.
"It's not too late for you, surely."
"Yes," she said.  "It is."
Terrill knew America was full of such young people, in deadend existences.  Most weren't aware of it, but for some reason, Jamie had already scoped out the future and decided it was hopeless.  He wanted to object and to tell her anything was possible.  But he knew that she hadn't even finished high school, that she had no skills and had to rely on her beauty.  Even that was beginning to wear off, though she was in her early twenties.  Where could she go?  What could she do?
Her grammar and diction were adequate -- nothing more.  Her clothing sense was that of a girl playing at being a sophisticated woman.  She would be limited even in her chosen profession; at best, forced to pick up strange men in bars.  At worst...he shuddered.
Once he had fed on such dregs of civilization, knowing they wouldn't be missed.  But that way of existence was behind him now.  Maybe he could help this innocent young girl, make up for some of his past.  It would be a small step, but in an immortal 'life', such small steps could add up.  Already, he had quietly used his wealth to help other humans in return for small kindnesses.
"Go home, get married, have a life," he said.
She shook her head.  "I attract the wrong kind of guy.  Always have.  I'm not going to be like my mother, marrying five times, each guy worse than the last..."
Terrill said nothing.  If she survived her dangerous and unhealthy profession, she would probably end up exactly like her mother -- marrying the men who paid attention to her, not questioning their motives, excusing their bad behavior, secretly believing she didn't deserve any better.
"Sylvie doesn't have to be like that," Jamie continued, as if reading his mind.    "She can go to college, get a good job.  Wait for the right man to come along."
He must have been frowning, because she playfully patted him.  "I'm sorry.  You don't need to hear all this.   But if you ever met Sylvie, you'd know why I talk this way...”
He didn't answer.  It was the rare human who could pull themselves out of their designated fate.  But something about this young woman's faith in her even younger sister was inspiring.  He'd help make it happen, he decided.  At least give them the chance.
He lay in bed with this young woman in his arms, the warmth of her body seeming to wake memories long forgotten.  Of life, of love and family and everyday existence.  It was strangely comforting.  For once, his hunger left him.  Or so he thought.

The windows glowed from sunlight one moment, and then darkened in the next.  Terrill awoke instantly at the cusp, as the ambient light shifted.
He got up, surrounded by empty mirrors.  If ever he was tempted to forget his nature, he need only rent a motel room, for which mirrors served as decor.  An empty room surrounded him, and empty mirrors surrounded it, as if he really didn't exist.  He only existed in the darkness and the shadows, which meant he was invisible, night or day.
In truth, he was unlikely to ever forget that.  He woke every evening hungry for blood.  For many decades he had been prudent enough to wake alone.  The one time he had forgotten -- the one time he had felt comfortable enough to let the human stay with him -- had ended badly.
Now this strange trip to a part of the country he’d never intended to visit, this crazy idea of approaching strangers, to risk his life.  All for a girl he'd barely known, with whom he'd planned a simple sex-for-money transaction.
But she had not treated him that way.  For the first time in a long time, she'd treated him like a human.
He dressed in a conservative suit, something that wouldn't stand out too much in a small town where most people dressed informally.  It was the best he could do.  He'd never owned a flannel shirt that he could remember, never even tried on a pair of jeans.  In part, he dressed formally because old fashioned classic clothing offered him more cover -- hats, gloves, vests, coats, long sleeved shirts and trousers, all gave him a small advantage over light.
It was also a remnant of his long existence.  Clothing styles came and went -- and he didn't even try to keep up with them.
He stuck his hand in his pocket and felt a burning pain in his hand.  He cried out, and withdrew the stinging object.  He dropped the crucifix out of his hand, but held onto the silver chain, which hurt him, but didn't burn like the cross.
He stared at it curiously.  He'd always been confused why crosses had this effect.  He had no opinion about religion.  He didn't believe in an afterlife -- other than the type he was experiencing.  It was all mumbo jumbo to him.  Why should a cross, or Holy Water, or silver or any other of the many folk wards have any effect on him at all?
Why question it?  Why were any of these superstitious talismans any less likely than the fact of his own existence?
He touched the crucifix again, and though it hurt, he found that he could stand the pain.  It burned a few centimeters of the surface of his skin, but went no further.
Without thinking he swung the chain over his head.  The cross bounced off his chest and then settled and he staggered and cried out.  The silver chain cut into the back of his neck, and he had the image of his head detaching, and bursting into flames. He reached up, and found the chain digging into the surface of his skin, but lodging there.
The cross burned into his chest and stuck, his skin fusing with it.  It continued to ache, but the sharp pain subsided.  He could stand it.  He removed the chain, because the wounds it was inflicting were visible.   The crucifix remained fused to the skin of his chest.
He'd once fed upon a priest, who when the outer layers of clothing were removed, had been wearing a hairshirt.  The mortal's skin had been mottled and covered with rashes.  His back flayed by self-flagellation.  As Terrill remembered it, the priest hadn't been a righteous man, but a vicious schemer who used the Inquisition for his own benefit.  So it had surprised Terrill to see that the man apparently had a religious side.
Or perhaps, sadomasochistic side, since the sadism was more than manifested by his official duties -- a torturer who tortured himself.
Terrill winced as he put on his shirt.  He didn't ask himself why he left the cross burning into his chest.

He drove to the Hardaway house the minute it became fully dark.  He'd probably catch them at dinner, but so be it.  It was important that they all be home.
He still wasn't sure what he would say.  Perhaps nothing.  Perhaps he'd hand over the check and walk away.  That's what he should do.  Anything else wasn't safe, either for him or for them.
But as he stood at the doorway, he knew he wouldn't leave without talking to Sylvie. 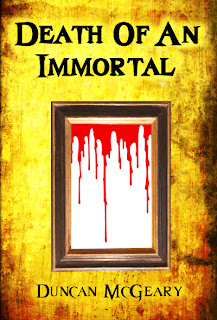 Posted by Duncan McGeary at 8:42 AM