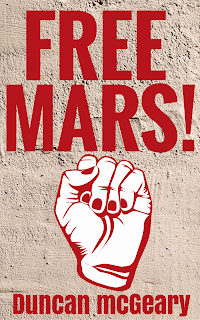 Final version. I rather like the stark simplicity of it. It's just a whim of a story, I don't want to make too much of it. (Though I rather like it.)

"FREE MARS! The Kids are Revolting.

"Spunky red-haired, freckled Sceeter has had enough. In the depths of the tunnels she scrawls "FREE MARS!" and before she knows it, the rebellion has begun, with her as its leader!"

The story is inspired by the utterly bonzo, but strangely wonderful conspiracy theory of child slave colonies on Mars.

If ever there was a call for a Heinleinesque young adult/adult science fiction adventure, this was it.

Posted by Duncan McGeary at 9:57 AM