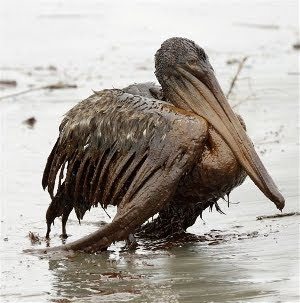 I have two words for you, B.P.

Even better, pictures of Brown Pelicans covered in gooey crap.

No matter what you say or do from now on:

(And I say to you, the American gas guzzlers and the Obama administration (nice timing on the drilling announcement, by the way), and to myself every time I fill up my car: Brown Pelicans!)

I passed a bunch of magnificently bearded fellows in front of Thumptown on the way to work yesterday.

Bunch of glory hounds. All out for the second-glances, and admirations. They're just in it for the dames. Me? I grow my beard for real, substantive reasons...

First off, got to say that Mont West is a great name for the owner of a western store.

Secondly, I wonder if he has the building already leased? It's actually big enough for one of the major chains -- and probably way too big for any local businesses.

Thirdly, more and more I get the sense in talking to other business owners, that it's almost a given that it's more lucrative to liquidate a store than to try and sell it.

"Property Bend spent millions on for city hall now a drain." The Bulletin, 6/5/10.

Kind of funny to me that the newspaper doesn't mention who sold the property until the ninth paragraph.

The former owners? The Bulletin.

I got to say, it seems to me that just about every decision the city council made in during the boom was the wrong one. I mean, flipping a coin would've resulted in better decision making. Or doing the 'Costanza': making your best guess and then doing the opposite.

"At Buchanan’s request, the OLCC also hired an independent investigator to look into Evers’ actions in the Corey’s and JC’s cases. She found that the videotapes in both cases contradicted both Evers’ reports and testimony.

Since then, Evers has been promoted from an inspector to regional manager over a territory that includes Crook, Deschutes, Jefferson and Wheeler counties. OLCC spokeswoman Christie Scott said the agency stands behind Evers and his talents as a regulator and investigator.

“I’ve been here for a year and a half, and I can tell you that Jason is one of the hardest-working members of our team,” she said. “He is exceptional, he is really someone who you want to work with.”

She said Evers was recognized by the OLCC in 2007 as an outstanding employee and given a “special merit increase” in pay.

“Jason’s credibility has not come up in any other context,” Scott added."

A notice of default is a legal document that initiates foreclosure proceedings and is generally filed by a lender after a borrower’s mortgage is 90 days delinquent. The notice states that the property secured by the mortgage is to be auctioned off by the lender roughly 150 days after the filing of the notice, if the borrower does not bring the mortgage current.

Remember when we thought 2008 was bad?

Same thing happening here, with all the ARMs resetting. Another couple of years before things get much better.

It will be a great buyers market come winter. I've watched bank-owned property drop a third or more and still sit empty this year.

Actually the hold on drilling is expected to cost several thousand pretty high paid jobs along the gulf coast.

So you have the spill killing off the fishing and tourism jobs and you have the ban impacting the oil industry jobs.

Man, I broke my rule about pictures.

Brown Pelicans, I say in a sad, sad tone.

Last time I was at the beach, I came across a dying bird.

It was....disturbing. Intimations of mortality, you know?

So it doesn't take much imagination to multiply that bird by thousands (millions?)

The thing that tears at you is watching the struggle, and feeling helpless. It isn't fast and easy, but like slow torture.

I finally turned away and walked a mile down the beach and came back, and it was dead -- looked like it had been dead for days, actually. All the life gone.

"Kind of funny to me that the newspaper doesn't mention who sold the property until the ninth paragraph. The former owners? The Bulletin."

In fairness, The Bulletin did not sell it directly to the city. That was Tod Taylor, Hap's son.

Adding extra poignancy, the brown pelican (Louisiana's state bird) had been endangered but was making a strong comeback ... until this happened.

And I mean "habitable" for humans, not just the pelicans and sea turtles. A planet that isn't habitable by other life forms will not be habitable by us for long.

To help people get a sense of the vast size of the oil spill, NOAA has put up an interactive site that lets you superimpose an outline of it on other locations. Here's what it looks like superimposed on Oregon: http://www.ifitwasmyhome.com