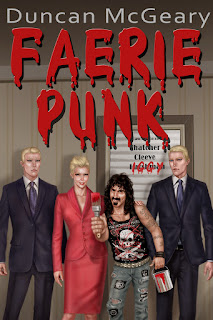 I've decided I need to start publishing my books, every three months or so.

The Darkness You Fear came out in May, and Tuskers III is due out in October, so I have a window of opportunity around August 1.

So I'm going to put out Faerie Punk.

I had lots of fun writing this book. It's sort of uncategorizable. Lara, my editor called it an "urban fantasy/road trip/heroic quest/coming of age story."

I had a neat cover made and its ready and it probably was never going to fit anywhere else, so it's a good choice.

So ready or not, world, here it comes!

Here's my synopsis so far:

"The genius half Elve, half Dwarve inventor Joseph Tindermaker left his inheritance inside an unbreakable Vault, and only a true heir can open it. Iggy Sinclair, a punk bounty hunter unaware of his heritage, is approached for what seems to be a straightforward job; find Carter Tindermaker, the missing son of the great inventor.

Grendor, the evil Ancient One, who was banished by the human One God ten thousand years ago, has returned, infesting a human A.I. , intent on taking over both mankind and Faerie.
As he makes his way from Oregon to New York City, Iggy discovers that Faerie and Mortal Realms exist side by side, with Pixies and Trolls and Ogres...Oh My!

The First Ones emerge from their sleep, and all of Faerie must choose sides. It is up to Iggy, along with his Changeling sister Kerrie, the half-Elve lawyer Maggie Cleeves, and the Ogre Chuck to make their way across a magical America to open the Vault and stop the Ancient One.

Part "American Gods," part "Wizard of Oz," part Kerouac, this an urban fantasy road trip through the ancient and the modern. A story of coming home to a place you never knew existed."